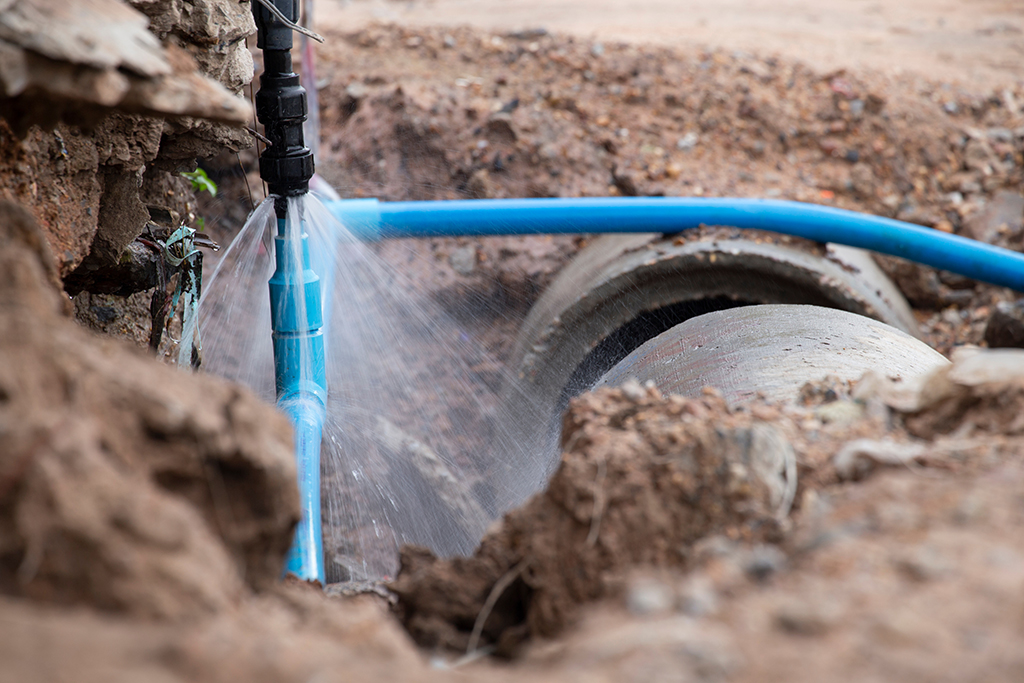 At Craig’s Plumbing serving Henderson, NV we’ve got the experience to find water line leaks where they usually occur. Sometimes, though, your pipes spring a leak somewhere unexpected, and even inaccessible, like deep in a wall or under your concrete slab. In the past, water line repair work meant exploratory surgery to visually locate the leak. Now, we’ve got the technology to target the leak accurately using sound.

Signs of Leaks that Require a Water Line Repair

A higher than normal water bill may be your only sign of a leak at first. Dampness on the wall or ceiling and perhaps a musty odor might also be clues. If it’s below the concrete slab, there could be cracking. Unexplained wet carpets or pads might also indicate water flow from your pipes. You might also hear sounds of water running or whistles that you can’t explain. Eventually, puddles might appear that give clues about where the leak might be. If the leak is a big one, like a broken or split pipe or joint, of course, it’s an urgent matter and you should call us for water line repair, any time of the day or night.

Causes of Leaks from Wear and Joint Problems

Many pipes move from vibration or shock in the lines as valves open and close. The loud “water hammer” is a good example, which occurs with fast shutoffs on the line, especially from appliances like dishwashers or washing machines that have automatic valves. In addition to the water line repair, we can also install water hammer prevention devices.

Vibrations from manual valves as the water reaches a specific flow rate and the pipes “sing” can also affect the pipes, especially if they are installed too close to each other or a wall and vibrate against something. Over time, joints could work loose, pipes could be damaged, and valves and pumps on the water line could be damaged and develop leaks. These kinds of leaks might appear as a puzzle first, but one day open significantly and become an obvious cry for a plumber’s help and a water line repair.

Leaks Due to Corrosion

In Henderson, the public water supply is of good quality, and a zinc-based additive helps to reduce pipe corrosion and leaching of metals into your drinking water at home. Still, copper and other metal-based pipes eventually do corrode and weaken, and any mechanical forces that they withstood might then be enough to cause the pipe to burst. Corrosion is one of the reasons that modern plumbing uses PVC and other nonmetallic piping. One way that we implement a lasting water line repair strategy is to replace some or all of your piping with modern materials.

Leaks in Walls and Ceilings

It can take some time for leaks in walls and ceilings to reveal themselves, especially if furniture is placed against the wall obscuring any softness, cracking, or discoloration of the wall material and covering. Ceiling leaks exhibit similar signs, usually out of sight simply by their location. If water flows towards a light fixture or down the wall to an electrical outlet or switch, you might call an electrician first. In the end, because of corrosion in the fixtures, you’ll probably need both an electrician and a plumber.

Many homes have copper pipe located underneath the concrete slab, the original water lines laid by the builder. Over time, the copper may corrode and leak. Changes in the soil or the occasional seismic events we experience here in the Las Vegas area can also shift the supporting ground under the slab and cause pipe breakage.

The leaking, buried pipe will need to be repaired or replaced. In many cases, that will require removing some of the concrete to gain access. It’s sometimes possible to dig under the slab and address the problem from underneath. Either way, even locating the leak can take a lot of time and equipment using traditional methods. Experience helps a lot, but it’s still a challenge to stop the water flow.

Using scientific principles similar to those used in sonar to detect and locate objects underwater, we can locate the leak quite well. This technology minimizes the number of places that we need to open walls and ceilings or remove concrete to investigate. We use the ability of pipes to conduct sound well and at a predictable speed to listen for the typical sounds that leaks make. Our equipment then calculates the distance along the pipe to where the leak is occurring. For plumbers, this is a revolutionary technology that allows us to serve our customers even better.

How We Use the Technology

When we visit your home or business, we’ll use this technology and other methods that measure the water flow, the pressure, and the temperature of water in the line to understand what may be happening behind the scenes. Together, they will help us provide the most appropriate and complete water line repair strategy for your unique leak situation.

The water line repair technique we use will depend on the type of piping present and its age. Our goal will be to seal the leaking joint or repair or replace the piping as appropriate, and to discuss with you the possibility of similar leaks occurring elsewhere for the same reason, such as corroded piping. We might suggest additional re-piping with a change to more modern and durable materials. Our goal is to provide the services you need to avoid future problems as well as correct the present leak.

Your Reliable, Experienced Plumber Since 1997

At Craig’s Plumbing we serve Henderson, NV, local residents who have relied on us since before much of the town was built. We know Henderson plumbing. For prompt 24-hour service when you pipes leak, drains back up, or you have another plumbing problem, just give us a call.