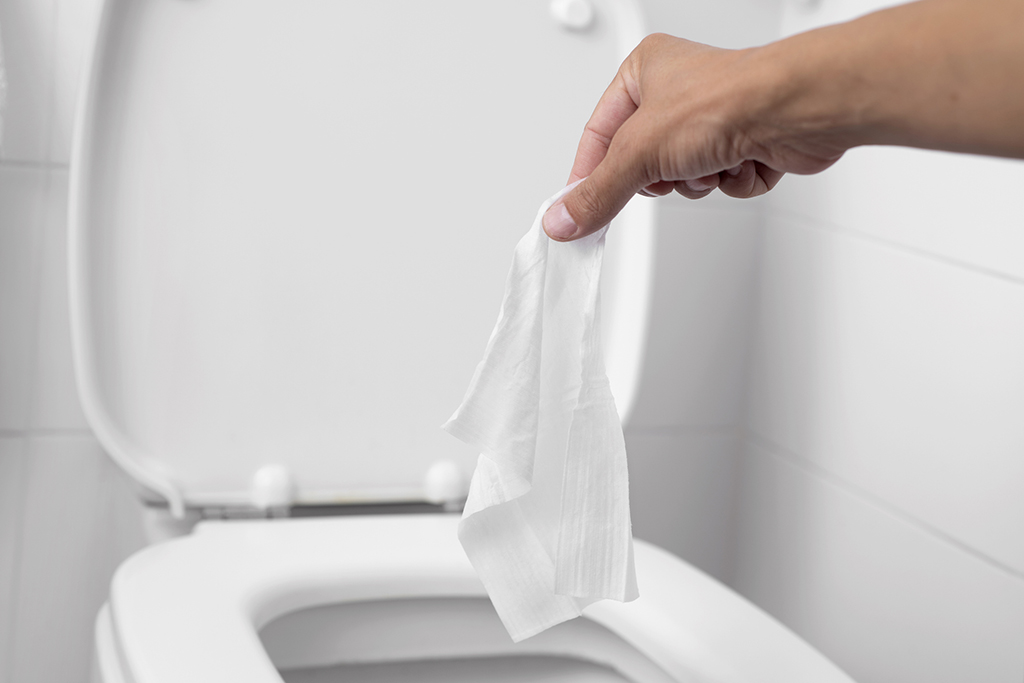 Photo By nito100 at istock

Unfortunately, the kinds of clogs that you get from flushing the wrong things down the toilet are often too complicated for a plumber to solve on their own. By the time these issues get into the sewer system, they’ve caused a lot of expensive damage for both homeowners and governments. Here are a few of the worst things to send down your drain!

Wait, aren’t flushable wipes supposed to be flushable? Isn’t that part of their name? Ask any reputable plumber about flushable wipes, and you’ll get a response ranging from a detailed explanation to a look of disgust. The truth is, flushable wipes are the bane of existence for many a plumber because homeowners think that they can send them down the drain with no problem, but they don’t end up breaking down in water. Toilet paper goes down perfectly because it breaks down in water in minutes. But flushable wipes take forever to disintegrate, leading to severe clogs in the sewer system. Just because it says flushable on the package doesn’t mean that it belongs down the drain.

Have you ever heard the claim that you need to pour fat into a can, let it solidify and throw it out, rather than pouring it down the drain? Well, the same principle applies with eggshells. When eggshells go down the drain, they wouldn’t cause an issue if it was only the shell that was going down the drain. However, eggs are filled with a lot of liquid fats, all of which can congeal in the drain and cause some serious problems. Very rarely do eggshells get completely separated from all egg residue, so be safe and throw them away.

Just because human waste goes down the toilet doesn’t mean that ALL human waste goes down the toilet. If you send a diaper down the toilet, get ready to call a Las Vegas, NV plumber, quick. Why? Simple: Diapers are designed to absorb wetness and are made to hold the fluids from a baby’s usage of it. When they’re surrounded by a lot of water, they’ll expand pretty quickly and cause a real clog. In most cases, you’re going to need a plumber to replace the pipe if you flush one.

Even Drano really doesn’t belong down the drain in most circumstances. Unfortunately, to the chagrin of many plumbers, some people believe that they can flush just about anything down the drain, including motor oil, paint, bleach and other harmful products found in the average household. The problem is that corrosive materials can eat through your pipes and cause a major leak and water damage throughout the house. When you flush a corrosive chemical down the pipes, what’s likely to happen is that the liquid will eat through the glue that holds your pipes together, and if you don’t bring in a Las Vegas, NV plumber to fix the damage, you’re going to have serious issues with your water system.

Even if it’s flushable kitty litter, it doesn’t belong down your drain. Think about it: what does litter do when your cat urinates? It clumps together to make it easier for you to scoop it out and throw it away. If it’s doing that when your cat deposits a little bit of liquid, what do you think will happen when it’s placed in a pipe of constantly rushing water? Something similar is almost sure to occur.

Even if you use flushable kitty litter, you’re going to have problems that require a phone call to a plumber. As with flushable wipes, just because it says that it’s flushable doesn’t mean that it can actually go down the drain without causing serious problems. Bottom line: if the product is not meant to disintegrate in water, it isn’t meant to go down your drain, regardless of what’s on the package label.

What Can I Do?

The best thing that you can do to keep your pipes from developing serious problems is to be mindful of everything that you consider putting down your drain. It might be tempting to just throw your food down the garbage disposal and let it take care of the issue for you, but it’s wise to take a few minutes to think about what the debris could do to your sink and whether it’s worth the risk that comes with putting down the food scraps.

If you think you have accidentally sent something down your toilet that doesn’t need to be there, it’s important for you to call in a professional plumber in Las Vegas, NV as soon as possible. Craig’s Plumbing is always available to help you out of a sticky situation and keep your plumbing from really getting out of hand. The moment you suspect that something might be wrong with your plumbing, give Craig’s Plumbing a call and let us handle the details so that you can keep the pipes flowing properly in your house!